Learning to validate your HTML is an important step for most designers. By writing valid HTML you ensure that your pages are standards compliant and will run on the most user agents and web browsers.

Building web pages isn't hard. With the software that is available now, you can write your web page and have it up and viewable in half an hour or less. And with these tools, why would you need to run an HTML validator on your HTML to find errors? Well, you don't have to, but if you want your pages to stay viewable through future versions of HTML, or you want newer browsers to be able to display it correctly, then writing valid HTML is the place to start.
There are several specific reasons for writing valid HTML, and using an HTML validator to insure that what you write is valid:
Compatibility with future versions of HTML and web browsers
As browsers evolve, they come closer and closer to supporting the standard HTML as written by the W3C. Even if they don't fully support the most recent version of HTML, the browser builders go in and make sure that they are compliant with older versions of the standard. If you are writing non-standard HTML, there is a chance that as browsers evolve, they will no longer support your web pages. A good example of this is a trick that some web developers used with an older version of Netscape. If you included multiple body tags with different colors, Netscape would load them all in succession creating a fade-in or flicker effect as the page loaded. This trick no longer works, as it relied on an incompatibility of the browser.
Accessible to Your Current Audience
Unless you know for a fact that your entire audience is using a specific browser, you are setting your site up to annoy some of your readers if you make it inaccessible to them through invalid or non-standard HTML. Many HTML validators will check your HTML for browser specific entities and alert you to their use. Browser specific HTML can be part of the standard or not a part of the standard. Don't assume that just because only one browser supports something it's non-standard. Or if multiple browsers support it, that it is part of a standard. For instance, HTML 5 is supported by Safari, Opera, Chrome, and Firefox, but it is not yet a recognized standard.
Reduce Unexplained Errors
I am often asked to look at web pages for people to tell them why the code is doing something strange. I can usually come back in just a few minutes and tell them what is wrong. Why? It's not because I know HTML inside and out, it's because I run their page through an HTML validator. This usually points out a problem with the HTML, that, when fixed, solves their problem as well.
HTML Validators
There are a lot of validators available. You can get ones that are run on your computer, embedded into your HTML editor, or online on your live web pages.
Posted by Younus Poonawala at 4:59 AM 54 comments

Bill Gates’ Mind Is In The Gutter. Literally. 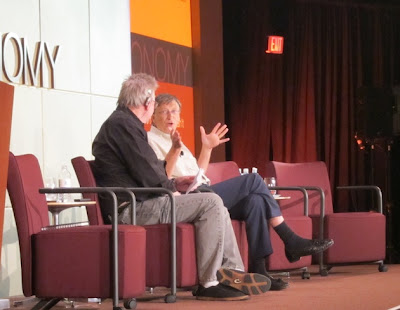 To wrap up the Techonomy conference in Lake Tahoe, CA, Bill Gates took the stage to talk with host Brent Schiender. A big idea of the conference was the future of technology, especially as it related to the economy. Gates talked a lot about that, but perhaps in a way you wouldn’t imagine. His mind was in the gutter. Literally.
“Latrines are fascinating,” Gates said. The way he said it was in a bit of a joking manner, but he’s not kidding. He talked about how many books he reads on the subject these days. “No one wants to read about it — it’s one of the greatest under-investments,” Gates said.
“We’re gonna have a breakthrough in the latrines,” he continued. He said that while the flushable toilet is the gold standard, it isn’t efficient at all. Someone is going to fix that, according to Gates.
So what books is he reading on the subject? He named a few. One was Water and Sanitation. “It’s quite lurid,” Gates joked. “It’s a super-important topic,” Gates reiterated. “You can visit poor-world latrines and learn from that as well,” Gates joked.
Gates really does think about this topic a lot. Later in the conversation, he returned to it when talking about investing in certain types of education. ”When it comes to things like investing in new toilets, not much money goes into that,” Gates said.
“You end up with the low IQ guy on the toilets.”
Indeed.
Source : TechCrunch
Posted by Younus Poonawala at 10:23 PM 39 comments

Now You Can Search For Google Docs From Within Gmail (And It Catches Typos, Too)

Google may be synonymous with search, but some of the search functionality in its Apps products is sadly lacking — if you want to search for something in Google Docs, Calendar, or Gmail, you’ve had to do it from within its respective app. Today, it’s getting a bit better: Gmail has just launched a feature that lets you search for Google Docs and Sites directly from within Gmail. You can activate the new feature under the Labs section of Gmail settings — it’s called ‘Apps Search’.
Apps Search also activates another cool feature: when you make a typo in a search query, you’ll get a “Did you mean” suggestion. I’m not entirely sure how typo correction is related to Apps Search, but I’ll take it.
Hopefully this is the start of a new trend — it would also be nice if you could search for Google Calendar events from within Gmail (and vice versa).  Google also recently released the headache-reducing multiple accounts feature, which lets you hop between multiple Google accounts without having to repeatedly log-out and back in.

Source : TechCrunch
Posted by Younus Poonawala at 10:03 AM 13 comments

How would you feel when you can proudly boast about a product which belongs to your community, your local language, last but not the least your country? Great, isn’t it? Lo and Behold, India joins the browser wars by bringing in its own Epic Browser, and while reaching out to you, I request you all Indians to download and experience a new world of exploring internet.

With its unique in-built features, the Epic Browser is one of its kind. It provides a one stop solution for a huge audience, which covers not only one click social networking access, but also varied information resources from domains such as Shopping, Local Events, Videos, Travel, Job Opportunities, Stock Market, Sports and more.. The sidebar apps allow you to play music, watch videos, play games, create, read, update and delete documents from and to your computer.

Epic Browser specializes in its User Interface and has maintained optimal standards while changing themes or using any of the applet. Especially, the Tri-Color Orb is an exceptionally well designed graphic, I must say. It is in fact a winner at the first look.

Below mentioned are some highlights about the browser:
Looking at such a fantastic browser deal, I have installed it today and am writing this blog through it. Indeed it’s not any 'just another browser' launched by a bunch of geeks. It’s a fully fledged, feature-packed, and efficient product. Most of all it is a FREE browser service provided to everybody in order to use, distribute and customize as per convenience.
However, there would be certain expectations apart from the bundle of generous features provided at the first go, some of the concerns are highlighted below:

# Hype vs Reality : Though the browser has launched with tremendous features will it live up to the hype? Of course, no one can answer this at the moment, but I pray that this browser gives a tough fight to all its competitors.
# Maintenance & Support : Any product launched in the market requires ample of support for usage, understanding, enhancement and so on. Even the maintainability if a software plays a major role in its success.
# Freeware vs. Licensing : Well, all good things in this world comes at a price. Epic Browser is free at the moment. What if the company starts charging for their services?


To conclude, I would say live in the present & download the browser today to enjoy its unlimited basket full of surprises in store.

Bulk SMS Solution to One of Prime Educational Institutes in Mumbai

Today, there are numerous ways to communicate effectively, and one of the most fool proof and direct to consumer technologies in market is SMS. As the name suggests, Short Message Services (SMS) is becoming more demanded as people prefer to receive discrete, precise and timely communication. It has its own set of advantages, firstly,  dependencies on computers for information is eliminated, even it is less time consuming and very cost effective.


Nowadays, we daily receive umpteenth number of promotional SMS's from our network service providers, as well as from other promotional services or finally from applications where we have registered for information. These SMS's typically includes:


Henceforth, post understanding the requirements of the client, we have offered Career Coaching Classes (Khopoli, Mumbai) a Bulk SMS offering which would assist the academic institute by:

Hence, to conclude it is wisely said, 'It is better to face the change than to change the face.' In today's competitive market, to keep the pace up with other competitors we need to indulge in the latest technology for engaging our customers with ourselves. SMS is one of those technologies.
Posted by Younus Poonawala at 8:04 AM 296 comments